Data science libraries, frameworks, modules, and toolkits are great for doing data science, but they’re also a good way to dive into the discipline without actually understanding data science. In this book, you’ll learn … more

Data Analytics Success Starts with Empowerment
Being Data Driven is not as much of a tech challenge as it is an adoption challenge. Adoption has it’s root in cultural DNA of any organization. Great data driven organizations rungs the data driven culture into the corporate DNA. A culture of connection, interactions, sharing and collaboration is what it takes to be data driven. Its about being empowered more than its about being educated.

Q:What is: lift, KPI, robustness, model fitting, design of experiments, 80/20 rule?
A: Lift:
Its measure of performance of a targeting model (or a rule) at predicting or classifying cases as having an enhanced response (with respect to the population as a whole), measured against a random choice targeting model. Lift is simply: target response/average response.

Typically, the modeler seeks to divide the population into quantiles, and rank the quantiles by lift. He can then consider each quantile, and by weighing the predicted response rate against the cost, he can decide to market that quantile or not.
if we use the probability scores on customers, we can get 60% of the total responders wed get mailing randomly by only mailing the top 30% of the scored customers.

KPI:
– Key performance indicator
– A type of performance measurement
– Examples: 0 defects, 10/10 customer satisfaction
– Relies upon a good understanding of what is important to the organization

Robustness:
– Statistics with good performance even if the underlying distribution is not normal
– Statistics that are not affected by outliers
– A learning algorithm that can reduce the chance of fitting noise is called robust
– Median is a robust measure of central tendency, while mean is not
– Median absolute deviation is also more robust than the standard deviation

Design of experiments:
The design of any task that aims to describe or explain the variation of information under conditions that are hypothesized to reflect the variation.
In its simplest form, an experiment aims at predicting the outcome by changing the preconditions, the predictors.
– Selection of the suitable predictors and outcomes
– Delivery of the experiment under statistically optimal conditions
– Randomization
– Blocking: an experiment may be conducted with the same equipment to avoid any unwanted variations in the input
– Replication: performing the same combination run more than once, in order to get an estimate for the amount of random error that could be part of the process
– Interaction: when an experiment has 3 or more variables, the situation in which the interaction of two variables on a third is not additive 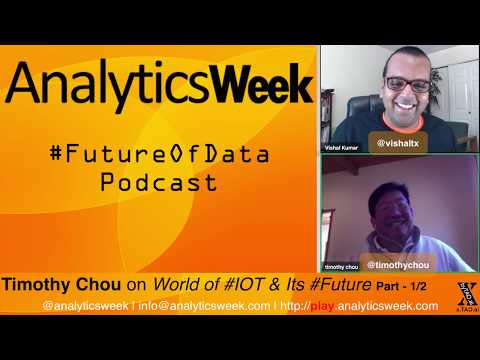 @TimothyChou on World of #IOT & Its #Future Part 1 #FutureOfData #Podcast

Data really powers everything that we do.  Jeff Weiner 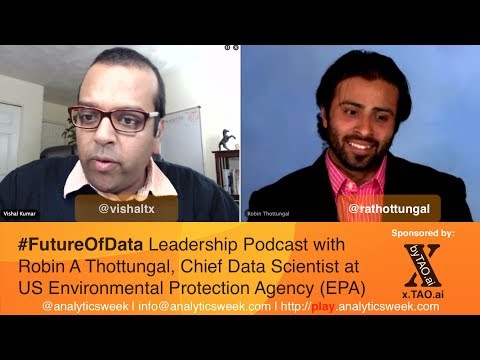 235 Terabytes of data has been collected by the U.S. Library of Congress in April 2011.